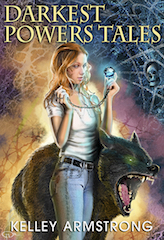 Dangerous (novella prequel to The Summoning). The story of how Derek and Simon came to Lyle House, told from Derek’s point-of-view.

Divided (short story, set between The Summoning and The Awakening). Derek and Simon’s adventures while separated from Chloe and Rae in the factory. Also told from Derek’s point of view.

Disenchanted (short story, overlaps part of The Awakening). Simon and Tori continue their journey after Chloe and Derek are left at the truck stop. Told from Tori’s point of view.

Facing Facts (short story set after The Reckoning). Tori discovers who her father is, and Chloe deals with a vengeful ghost. Narrated by Chloe. Previously published in Enthralled.

Belonging (novella set after The Reckoning). Derek’s werewolf family comes to claim him. Told from Derek’s point of view.

This is a Subterranean Press ebook only release. Please note that this is a combination of the two mini-collections previously known as “Darkest Powers Bonus Pack” 1 & 2.

This is available in paperback as part of The Complete Darkest Powers Tales compilation.