Think your in-laws are scary? Try meeting Paige Winterbourne’s potential father-in-law: CEO of the Cortez Cabal, a multinational corporation…and the supernatural equivalent of the Mafia. Lucas Cortez has devoted his life to ruining the Cabals, though that doesn’t stop his father from expecting him to take over the family business someday. Benicio’s favorite ploy is to appeal to Lucas’s quixotic ideals by asking him to investigate Cabal cases of injustice.

After years of failure, Benicio finally has the perfect case: a teenage witch attacked and left for dead. Refusing will be difficult enough for Lucas…near impossible for his new witch girlfriend. Paige and Lucas soon discover that the young witch wasn’t the first Cabal teenager attacked.

When the infighting among the Cabals threatens to let the killer continue his spree, Paige and Lucas decide it’s up to them to stop him. The chase takes them on a cross-country hunt through the supernatural world, where allies can be found in the strangest places, including a celebrity necromancer, a wise-cracking Celtic deity, a pissed-off ghost, a half-mad clairvoyant, and a group of vampires who’d really rather be in an Anne Rice novel. 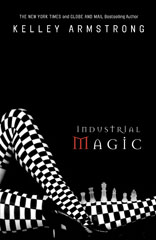