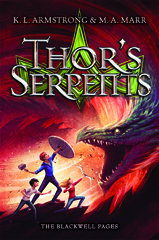 Norse legends walk among us…

Thirteen-year-olds Matt, Laurie, and Fen have beaten near-impossible odds to assemble their fellow descendants and champions of the Norse gods, coming face-to-face with trolls, fire-breathing monsters, and even death. Now they have to tackle their most epic quest of all: stopping the apocalypse in its tracks. They’ll need all their strength and wits—and each other—in order to defeat the fierce monsters and obstacles that await.

But when they learn that Matt must go into the final battle alone and Fen and Laurie are pulled in other directions, the friends have to accept that they can’t take this journey together. Matt, Laurie, and Fen will each have to fight to be true to themselves and one another, and to survive. With the fate of humanity hanging in the balance, there isn’t a lot of room for mistakes—and to save the world, each of them must learn what it really means to be a Champion.

The stakes couldn’t be higher in this action-packed and thrilling conclusion to The Blackwell Pages trilogy.